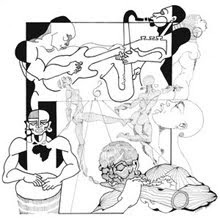 All praises to Porter Records and producer Luke Mosling for dusting off and disseminating this treasure from Philadelphia’s long defunct Dogtown imprint. Mosling has shepherded other of the label’s offerings back into circulation but this 1972 album just might be the crown jewel of that exceptional and rarified catalog. The line-up in the septet goes a long way toward illustrating its worth. A group portrait reproduced on the back cover depicts all but percussionist Omar Hill leaning casually against a graffiti-speckled wall. There’s also a helpful rundown of the members’ astrological signs along with their instruments (altoist Byard Lancaster, vibraphonist Khan Jamal, and bassist Billy Mills are all Leos, represent!).

Several of the session’s cuts would sound right at home on the Spiritual Jazz compilation Jazzman released a few years back. The ensemble comes out of a similar post-Coltrane, black empowerment bag with hungry ears wide open to all strains of African American music. Lancaster serves as sole horn and principal soloist, though Jamal and guitarist Monette Sudler also feature prominently in the playful pecking order. Sudler, in particular, shapes memorable patterns that straddle jazz, funk and rock stylings while threading in freer leanings too.

The catch phrase “rhythm section” is unusually apposite in describing the rest of the ensemble as the grooves they generate are some of the most memorable and pervasive of the era. The side-long starter “Happy Tuesday”, kicked off by conguero Rashid Salim unaccompanied, builds into a Richter magnitude vamp rivaling that of the Art Ensemble’s “Theme De Yo-Yo”. Mills’ amplified strings accord his corpulent lines a rich elastic resonance in concert with the percussion section rounded out by Dwight James sturdy, at times strident, traps play. Sudler is largely lost in the friendly melee during the first half of the piece, but asserts herself in the second with an extended display of striking fret play.

“New Horizons” comes in two distinct and galvanizing versions, each working from a sibling percolating groove. After a declarative drums preamble from James, “We’ll Tell You Later” is all Lancaster’s and he attacks his horn with free-associative fervor, reeling off some of the most ferocious blowing of the date. Sudler soon joins him with jagged scalar accompaniment and the rest of the band follows in quick succession. With the finish line in sight someone shouts a sudden count off and the band turns on a dime into another rugged funk workout. The bite-sized closer “New Life” sounds ideal for jukebox consumption, another funky-minded morsel that’s even closer in kinship to the aforementioned “Yo-Yo”.

At the height of their popularity, Sounds of Liberation apparently played a gig opposite Kool and the Gang at the 6th Annual Miss Black America pageant. Based on the gravity and superiority of the grooves here it’s not hard to imagine them schooling those Jersey funk icons in swift fashion from the stage.
Posted by derek at 9:46 AM