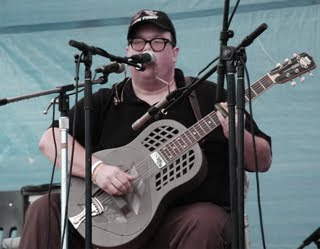 Please excuse this break from regularly scheduled record-reviewing for a little concert-going communiqué. Last night, I ventured out into the single-digit Minneapolis weather with a singular purpose in mind, to catch one Mark “Porkchop” Holder in-person at a local watering hole that kindly waives any kind of cover.

Holder was easily one of the highlights of last summer’s Deep Blues Festival, a gathering of like-minded musicians that fall under the rubric of that somewhat-nebulous Robert Palmer-coined phrase. Formerly one-third of the Black Diamond Heavies, he’s been touring as a band of one for awhile now and isn’t the worse for wear. He resembles his nickname both in rotund frame and the high caloric content of his fretwork. Overalls, t-shirt and ball-cap are his preferred attire and he makes do with a National Polychrome Tricone Steel-Body Resophonic guitar, amplified foot tambourine, and a device he refers offhandedly to as a thumper, an amplified piece of wood that serves as primitive kick drum. Harmonica rack is another accoutrement when a song in question calls for it.

A repast of massaman curry in my belly and thirst momentarily quenched on several tap-drawn Bourbon County Stouts, I bellied up at the corner of the bar with a clear sightline to the stage and the beginnings of a pleasantly-numbing buzz. Sadly, a good portion of the 50-strong crowd was there for the bar’s weekly trivia night and emptied their seats when Holder took the stage. “I’m from Nashville, Tennessee, where it’s not the heat, it’s the stupidity,” he quipped as a means of hasty introduction, launching into killer breakdown “If I Had Possession over Judgment Day”. “Delia” followed, Holder crediting it to Johnny Cash, though I think it holds older folk origins. Once again the plugged-in slide work was stellar, a complex edifice built with the bricks of Bukka White, Robert Johnson and Fred McDowell with frills and embellishments that were clearly his own. Other standouts in the set included “My Black Name”, a slow and harrowing, “You Got to Move” and a surprise rendering of “Gallows Pole” that was far more Leadbelly than Led Zeppelin.

The set was short and the crowd slim, but I was more than satisfied. Holder signed off with patchwork version of “Hambone”, explaining “This song is a bunch of verses strung together, some taken from nursery rhymes, others from Tin Pan Alley, but basically it’s about fucking.” Deep Blues Fest organizer Chris Johnson, who had a principal roll in booking the gig, made the rounds through the meager audience with tip jar in an effort to bolster the take. I had a chance to chat with Holder briefly after the gig and finally nab his two solo discs, which I’d failed to get at his previous Twin Cities hit over the summer. A section of his self-penned liners aptly summarizes where he’s coming from:

“So, here’s what you’ve got in your hands; it’s my street act, mic’ed up. Guitar, vocals, foot-thumpery and harmonica tracked in realtime, all at once, no overdubs, no second takes, no bullshit. Two inch tape like Jesus intended. I’m happy with it. Sounds like me. This is who I am. What I love and what I do. If I played in your kitchen (which, like most things in life, is negotiable), it would sound like this. I hope you enjoy this recording. If you don’t… tough shit.”

Best part is he’s in town through the weekend, holding court at another Minneapolis Bar, Palmer’s, on Saturday in the company of another slide guitar doyen, one Kenny Brown on loan from Mississippi. I’m counting the hours… in the meantime, here’s a little taste of the man in action at the DBF…