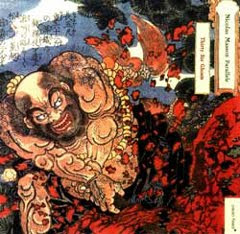 Swiss saxophonist Nicholas Masson’s Parallels consists of conventional instrumentation save one crucial component, the presence of Fender Rhodes in place of piano. The album’s novel title and design reference renowned tattoo artist Horiyoshi in the stylized depiction of figures from feudal Japanese mythology. It makes for a beautiful and striking package, one that the music regrettably doesn’t quite equal for the most part.

Masson handles all of the composing and his pieces make clever use of the broad tonal color schemes accessible through Colin Vallon’s electric instrument. That canny mutability immediately recalls the sort of work Keith Jarrett accomplished in the company of Miles at their epochal Cellar Door stand. Bassist Patrice Moret and drummer Lionel Friedli take like salmon to a spring stream when it comes to Masson’s groove-infused schematics. Problems present themselves in the rhythmic and harmonic rigidity that occasionally underscores the leader’s creations. It reminds me a little of the difficulties Ken Vandermark sometimes confronts in his writing for the Vandermark 5. Masson’s melodic language on tenor periodically brush the edges of the boilerplate blowing and there are a few moments where the band traffics precariously close to the safer side of Seventies fusion.

Masson’s preferred device on many of the pieces is the slow boil build. The opening “Sirius” and “Le Phasme” scroll by for most of their length without making much of a memorable impact, despite conveying some pleasant atmospherics. “Arsenic”, “Bermuda” and “Yeah Baby” initially follow this framework at only to up the intensity ante in their closing minutes, accelerating tempo and/or density with galvanizing segues to circular menace thanks in large part again to Vallon’s forceful coloring and the close syncopated symmetry of Moret and Friedli. Other pieces, like the frenetic “Hellboy” and brooding “Sentinel” get by on cleanly stacked beats, energetic interplay and elastic grooves throughout their duration. Masson and his sidemen may not score an unqualified win with this outing, but high marks for effort and intent certainly seem in order.
Posted by derek at 4:33 AM