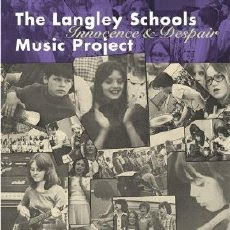 There was a time not so long ago when anyone with a few bucks in his or her pocket could press a record on any number of boutique labels. This fascinating collection culls from that era, specifically the mid-Seventies when an enterprising elementary school music teacher named Hans Fenger sought fit to record his students in a Canadian school gymnasium. Rather than resort to the musty choral songbooks of the curriculum, he opted instead for a program of popular songs that the kids were familiar with. Decades later, rescued from the thrift store bins they ended up in, the results carry the unintentional intrigue of outsider art. Like The Shaggs before them, these kids get by largely on naiveté and charm. The choir-plus-band’s rundowns are rickety and frequently tune-challenged, but the brio and earnestness in abundance works as a fine ballast. Fenger’s arrangements are an instant trip too, varying from the spare piano accompaniment of “Desperado” sung by one Sheila Behman, age 9, in a wistful, fragile falsetto that easily beats out the Don Henley original by my Eagles-allergic ears, to small orchestras of xylophones, drums and steel guitar, as on the arrangement of Bowie’s “Space Oddity”(!) Three other standouts are the versions of Fleetwood Mac’s “Rhiannon” and Michael Murphy’s AM-radio staple “Wildfire”, and Klaatu’s “Calling Occupants of Interplanetary Craft (The recognized anthem of World Contact Day)". A little goes a long way, but taken in sparingly, these songs have the satisfying sweetness of aural truffles.
Posted by derek at 7:46 AM