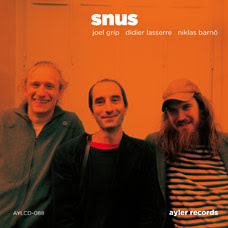 Originally formed for the auspicious occasion of Alan Silva’s 70th birthday in Paris, Snus is a European trio that takes the expatriate bassist/composer/improviser’s legacy to heart. In other words, they play full contact free jazz, listener helmets and protective padding strictly optional. This live set, a reconvening initially planned in the promising aftermath of that inaugural Silva-celebratory gig, pulls no punches from the start.

Swedish bassist Joel Grip practically turns his instrument into firewood, chopping mercilessly at his strings, first with fingers and later with bow. French drummer Didier Lasserre is similarly draconian toward his drum kit in driving home fractured passels of beats. The opening “E 1520” Niklas Barnö, another Swede, barks out stentorian smears and slurs on his trumpet across a spectrum that encompasses Donald Ayler and Axel Dorner. The mics capture all three close and hot and the eleven minutes that constitute the set’s first two pieces, “E 1520” and “Tobacco”, make for a gloriously teeth-gritting musical assault.

It’s not all bullhorns and battering rams though. “Water” switches channels to the trio’s free improv frequency where the component sounds are often just as abrasive, but tempered slightly by heightened space and texture. Grip generates a percussive snap to his plucked patterns on “Aroma” that bring Money Jungle-Mingus immediately to mind. Barnö picks through scraps of metalicized melody as Lasserre skitters and scampers at the edges on a combination of sticks and brushes. “Salt” shows off Grip’s rosin-combusting bow work while slow smolder of Barnö muted and Lasserre’s brushes on “Smoking Flavour” picks up steam and structure through his incessant pile-driving thrum.

Not so long ago, Ayler’s future was worryingly uncertain. Not so now as producer Stéphane Berland, who took over for founder Jan Strom, continues to find and foster and musicians with the same conscientious attention to quality and consistency. With ensembles of the caliber of Snus in the stable, the label’s fortunes appear on the rise indeed.
Posted by derek at 8:31 AM