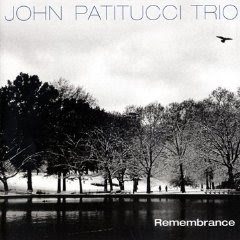 The lucrative lure of session work can be a perilous proposition for the creative musician. Bassist John Patitucci has fallen prey to the seduction for much of his career. Blessed with sterling chops and stylistic impartiality, a fair share of smooth jazz, pop and funk fusion dates accumulated on his resume over the years. However unfair, I liken it to the Pat Metheny Syndrome where projects chosen by a player pale in comparison to what he or she is capable. Patitucci sets the record partially straight with this Concord release from last year, his seventh for the label and a disc that narrowly missed inclusion on my year-end list. A high percentage of the success goes to the significant assists of his sidemen, saxophonist Joe Lovano and drummer Brian Blade. Both match Patitucci in terms of their mastery of their instruments and more importantly in this context, are perfectly willing to push his artistic envelope.

Old habits die hard though and the disc is checkered with a few performances that fall short of the promise. The curiously-titled “Messaien’s Gumbo”, burbles along on a standard issue funk bass ostinato, but Lovano’s lithe interjections and Blade’s porous beats manage add an appreciably amount of heat to an otherwise pedestrian piece. “Mali” unfolds as a better vehicle for Patitucci’s electric 6-string, building from a juicy afro-funk vamp and Blade’s dancing polyrhythms in concert with guest percussionist Rogerio Boccato. The leader’s thumb-bruising solo revels in groove and makes the boilerplate of his earlier excursion seem all the more forgettable. “Meditations” features his 6-string electric piccolo and finds the trio delving into atmospheric territory reminiscent of the schmaltzier side of one of Lovano’s other employer’s, the Paul Motian Trio with Bill Frisell. As the other session guest, Patitucci’s wife Sachi plays cello on “Scenes from an Opera”, a somber orchestral-textured piece benefits from Lovano’s overcast alto clarinet and Blade’s deftly deployed brushes and mallets.

Other pieces offer up state of the art samplings of pizzicato double bass. “Sonny Side” spools out at a slow stroll with Lovano tapping his inner Joe Henderson through breathy melodic wisps. The energizing “Joe Hen” is its opposite in mood in tempo and Patitucci puts his bull fiddle through a punishing set of paces.
Despite a few less-satisfying detours, the program holds together well in mapping the numerous facets of Patitucci’s musical personality. Lovano and Blade are inspired choices as partners and the disc is an effective corrective for listener’s who may have pegged Patitucci as a one-trick pony on his past work.
Posted by derek at 7:27 AM