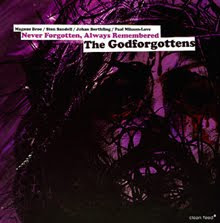 A starkly-sketched close-up of a crucified Christ and a band name that suggests a motley covey of heathens wandering in the wilderness offer two abstruse clues to the Godforgottens concept. Comprised of Magnus Broo on trumpet, Sten Sandell doubling on Hammond B3 and piano, Johan Berthling on bass and Paal Nilssen-Love on drums, the quartet earns instant cachet with those who follow European free jazz. Their work in this context, while certainly related to that parent idiom, strikes off on a boldly different tack. The disc’s three pieces appear collectively improvised and are slab-sized in form and length. Themes and variations surface and sink, but the performance has the loose feel of a fusion-era Milesean exploration with open ends and a porous itinerary. The four players rectify any ruts in trajectory that occur with quick reorientations in direction and design, masked in part by the fluidity of their interplay.

Sandell’s orchestral methods on the B3 pull in equal parts Atlantis-era Sun Ra and religious-minded Messiaen, veering from ominous burbling abstractions to baroque pipe organ-like swells. His piano playing comes off as comparably dynamic, spanning the majestic, pedal-augmented block chords that arrive in the final minutes of the opening “Always Forgotten” and the kind of minimalist key plinking that opens up chasms of space in the second piece “Never Remembered”. Broo takes another page from the book of Miles on the latter track where what he doesn’t play is often as important as what he does. His grainy aerated tones make for excellent contrast with Sandell’s denser constructions.

Berthling’s presence suggests a certain redundancy at first glance in light of Sandell’s access to bass pedals but he’s hardly so, especially on bow building striated drones and in churning pizzicato ostinatos that reliably make him heard. Nilssen-Love is a master of the organized avalanche, particularly on the closing piece, “Remembered Forgotten”, the cascades from his kit adhering to complex rhythmic codes against overwhelming his compatriots. Sandell and Berthling complement perfectly, carving a braiding bass register groove that recalls the best of Ra and Ronnie Boykins while Broo blasts and bleats above. Sandell’s Tuvan-style throat singing, yet another left field ingredient, coupled with whirring organ sustain accords the piece a heightened incantatory feel. This is heady, uncompromising improv, refreshingly apart in both instrumentation and tactics. Forgotten in name, this band’s music invites the opposite with its immediacy and creativity.
Posted by derek at 10:31 AM