Jason Stein – In Exchange for a Process (Leo) 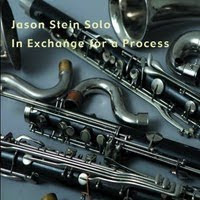 Doesn’t sound like Dolphy. That’s high praise for a bass clarinetist in this day and age when the dearly departed trailblazer’s shadow still looms large and invasive. Chicagoan Jason Stein has the added arguable advantage of not being a doubler. The long and lanky reed instrument is his sole chosen means of musical expression, leading to an airtight embouchure with a laser focus. Stein embraces the whole of his horn on this bracing solo recital. He plays pretty and raucous, taciturn and ebullient, bouncing confidently between a spectrum of emotions and dialects. There’s the pursed lips, breath-through-tube texturing of “Paint By Number”, where gentle slap-tonguing yields percussive punctuations to aerated gusts, and the comparatively linear lyricism of the opening “For the Sake of Edgar Pollard”. The initials in “E.P. and Me” make a possible nod in the direction of another potential influence, but it’s the subsequent “Hysterical Eric” that contains corkscrew multiphonics that echo the vernacular of Evan Parker.

Perhaps the most remarkable aspect of the set is the lack of artifice or ego in it. Solo albums often involve ample displays of the artist’s exhibitionist tendencies. The endgame becomes one of one-upsmanship with those who have played prior on the instrument with the listener caught in the crossfire. Stein’s chops are massive, but the pieces he devises stay free of pretension and retain a winsome organic flow. Even in the moments when he’s dealing in minimalist fragments devoid of distinctly discernable structure an underlying musicality maintains in his musings. The impression that he’s found the ideal vehicle for his musical imagination lingers. “Murray Flurry” and “Handmade Chicago” delve deeply into the instrument’s delicious tonal roundness, the former making explicit mention of its inspiration source in title and lush timbres. “Temporary Framing of Dr. J” aims opposite for rafters-register in a string of keening whinnies and brays. All of the tracks adhere to modest durations and the disc’s refreshing brevity works in its favor rather than to its detriment. What Stein exchanged to acquire his own particular process isn’t clear, but the impressive aural results here suggest that he got the better deal.
Posted by derek at 8:28 AM