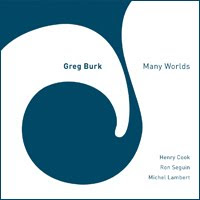 In common with many of his peers, pianist Greg Burk has his hands in a number of creative cookie jars. A working trio with drummer Gerald Cleaver and the Lunar Quartet with saxophonist John Tchicai, along with the quartet featured here account for just a few of his musical outlets. Burk counts Paul Bley, George Russell and Yusef Lateef among his teachers. The enviable tutelage of that trio manifests in a grounding melodicism along with a keen touch when it comes to threading together composition and improvisation. Those elements hold ample sway on this latest outing, which balances five free-standing pieces with a six-part suite. The album also represents a departure from the frequent Chicago-locus for 482 Music, the music originating from Rome over a nearly four-month span in 2007.

Burk’s brief accompanying essay imagines the playful activity of subatomic particles as ambassadors of sound between instruments. It’s a colorful comparison point and one enhanced by the careful attention he and his colleagues pay dependable attention to detail in the music. Burk and drummer Michel Lambert bring in texture-tuned percussion and saxophonist Henry Cook regularly turns to flute, particularly early on, the quartet conjuring a line of improvisational inquiry that aligns with McCoy Tyner’s post-Coltrane experiments in spiritual jazz. Burk’s grand, pedal-buttressed chords on the opening “Sonny Time” and “In Pursuit of Matter” echo the free-wheeling, rhapsodic side of the elder pianist. The closer “The Spirit Will Take You Out” delivers the most concentrated example, Cook’s wailing soprano soaring against a swirling, seething accompaniment that cedes nothing in terms of each instrument’s audibility.

Lambert’s brushwork nearly steals the spotlight at several junctures, starting with his scampering on Burk’s “BC” though his stick work is equally adroit in combining agility with momentum as on the lush “Storm Cloud”. When the threat of over-sweetening arises as with the latter piece, Burk wisely counters with strategically-placed surges of gentle dissonance. Bassist Ron Seguin switches between acoustic and amplified strings and builds a big booming sound on both. “Particular” pulls the four into floating free improv, Cook consigning to fluttery reed pops and keypad patterings while Burk goes under the hood and Lambert’s brushes tumble assiduously at the flank. Working within the most quotidian of jazz instrumentation with only minor tweakings, Burk and his band mates still manage to arrive at something definitively apart from the commonplace.
Posted by derek at 8:25 AM