Tomas Ulrich's Cargo Cult - If You Should Go (Cadence Jazz) 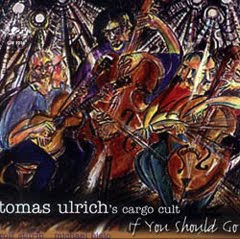 “Chamber trio with teeth” serves as convenient shorthand for cellist Tomas Ulrich’s Cargo Cult. This disc was the first of two released in 2009. I initially slept on it and only got hip to the ensemble upon hearing their second effort, self-titled and issued on CIMP. That set made mention in my year end piece for Dusted Magazine. This set, originally a demo tape sent to producer Bob Rusch, documents the players in less polished form, plying their music in front of a live audience in Kingston, NY in early 2007. It’s raw by comparison with CIMP session, but also rewarding in the way in which it presents the trio at an earlier stage, finding their collective sea legs and relying on a reservoir of shared purpose that eclipses any indulgences or blemishes in interplay that arise.

Ulrich and bassist Michael Bisio are no neophytes to the Cadence family, both having recorded on numerous occasions for the company’s labels and earned Rusch’s confidence. Rolf Sturm is a comparatively new name to me, but his facility on both acoustic and electric guitars features prominently in the trio’s sound. The harsher side of Ulrich’s instrument haunts the openings minutes of “The Last to Know” and “Existential Fragility” as his slashing bow scares up abrading showers of stentorian dissonance that rival those of renowned string-shredder Fred Lonberg-Holm. The balance of the recording favors his positioning and when he goes at it full bore, Bisio’s contributions suffer the consequences, occasionally almost drowned out in the din. These opening pieces feel a bit ragged and long-winded when compared to clarity and acuity of the ones that follow.

Even though Ulrich enjoys certain advantages in the mix, Bisio isn’t one to defer quietly. Midway through the beautifully-rendered ‘Rains End”, he plays a knuckle-popping solo high on the bridge and accessing a pitch region in proximity to Ulrich’s cello. Sturm opts for acoustic strings, picking dulcet patterns and it’s the most chamber-sounding performance of the set. The closing “If You Should Go” gives him free reign on his electric instrument and he uses liberal swathes of reverb and echo to heighten the drama. Ulrich sits out for most of the piece, coming in for the closing minutes with a pitch-perfect arco summary and sign-off. Their CIMP may have an overall edge, but this earlier entry is just as worthy of exploration.
Posted by derek at 4:31 AM