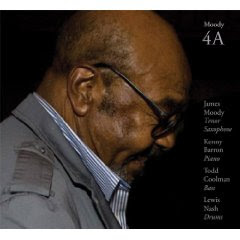 Much like the cruel joke of Lucky Thompson’s sobriquet, there’s a certain unintentional perversity to James Moody’s surname when considered through the fractured prism of his life. Harrowing travails with mental illness, substance abuse and racism threatened to derail his career on various occasions over the past six decades, but Moody soldiered on. He even composed a tune, “Last Train from Overbrook”, illustrating in musical terms his discovery of personal recovery as a means of creative catharsis.

Now an octogenarian, those obstacles are relics of Moody’s past. He’s well past the point of proving himself or justifying his continued presence on any scene. That hard won, late-game confidence suffuses this studio session recorded in the summer of 2008. His colleagues are as congenial as the set list, a short batch of standards that Moody could probably play in his sleep. Fortunately, there’s nothing somnambulistic about the way they comport them. Pianist Kenny Barron makes for an inspired lieutenant and second soloist. His lush statement on “Stablemates” is just one of several specimens evincing quiet pianistic quality. Bassist Todd Coolman and drummer Lewis Nash acquit themselves amiably to support, stepping up for the occasional solo, but mainly according Moody his royal due and audibly enjoying a relaxed audience with the veteran.

The program’s manifold pleasures don’t depend on the songs themselves. As with most repertory jazz, the worth manifests in how the players come to terms with the well-furrowed particulars of the pieces and personalize them in turn. Moody’s reading of “’Round Midnight” is a perfect case in point. The fingerprints-coated changes have been handled millions of times. Moody himself has probably played the theme on occasions numbering well into the thousands. Somehow though, even with that preponderance of precedence, his burnished tone and loose-jointed phrasing still manages to rub off something winsome from the tune. “Stella by Starlight” and “Bye Bye Blackbird”, old gray mares themselves, also receive fresh coat-brushings with bossa and waltz bristles, respectively.

It’s always tempting to cap a review like this one by preemptively calling out those with qualms toward such final lap coasting. Moody’s decision to focus the time he has left on the familiar and what he loves doing hardly seems worth faulting. That he still has game to the stellar degree demonstrated is almost just icing.
Posted by derek at 10:23 AM