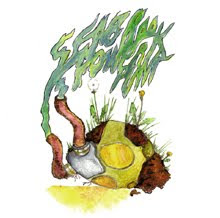 The Seabrook brothers are either on to something or on something or both. Hand-drawn imagery of rodents in gasmasks and toxic green fumes floating above dandelions adorns the album art on their trio’s self-titled debut, calling to mind the ingredients of a bad acid trip coupled to one too many readings of The Lorax. Their shared band moniker name checks a New Hampshire nuclear facility and while it leaves out bassist Tom Blancarte, he’s hardly second (bull) fiddle when it comes to the sounds, which are striking and unequivocal from the onset.

A misplaced press sheet precludes me from parsing their stated particulars but the music speaks loudly and succinctly for itself. “Peter Dennis Blanford” leaves the birthing canal like a manic love child of Mick Barr and Uncle Dave Macon, Brandon Seabrook’s banjo chattering and clattering amidst a staccato fusillade generated his brother, Jared’s drums and Blancarte’s turgid bass stomp in a manner that approximates shattering glass. “Ho Chi Minh Trail” yields not a sliver of speed as another shower of claw hammer arpeggios rains down on a compressed string of math rock detonations underscored by a tamboura-like banjo drone. Punctuating rock breaks are hermetic and bruising alongside by turns snapping and slashing bass. The piece culminates in a dizzying dervish cloud of sawing strings that disperses abruptly.

Brandon switches to brittle amplified guitar for “Waltz of the Nuke Workers” deploying a razing assemblage of riffage in claustrophobic arcs against another barrage of punishing beats by his brother. Several brief interludes of comparative calm intersperse, but an overarching aura of menace sustains. “Base Load Plant Theme” breaks up pogo-stick guitar and bass with pummeling syncopations as Brandon tries on different shambolic riffs for size in short succession. The threesome metal proclivities really show through on “I Don’t Feel So Good”, which opens on a monolithic, Sabbath-worthy riff that sounds oddly like a distant cousin to a Toho Studios theme announcing the lurching onslaught of some radioactive prehistoric beast.

This kind of music invites florid, fanciful description and sets of ears willing to take a creative beating. While I’ll admit to beginnings of a headache by disc’s end I’ll also readily cop to the fact that outcome isn’t necessarily a bad thing. The parts aren’t quite in complete alignment yet, but this promising debut and one that bodes well for the Powerplant’s next meltdown.
Posted by derek at 7:44 AM