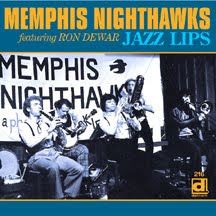 Delmark’s Bob Koester remains the jazz genre’s Rock of Gibraltar. Septuagenarian and by reliable accounts (yours truly included) a congenial curmudgeon, he’s cultivated a set of musical tastes at once abiding and responsive, catholic and inclusive. Such contradictions aren’t lost on him so much as he hardly seems to care. He knows what he digs and what he doesn’t and his continued stewardship of traditional forms right alongside Chicago’s community of cutting edge free jazzers is testament to this sort of enduring broadmindedness.

Jazz Lips, the latest addition to Delmark’s trad jazz ledger, exposes a comparable kind of irreverent reverence. It’s an augmented reissue of recordings made between 1976 and 1977 by the Illinois-based Memphis Nighthawks. The source of their moniker is reportedly a 1932 Vocalion acetate by an eponymous band that wasn’t from Tennessee either (chalk another tick in the contradiction column!). Their instrumentation is similarly idiosyncratic, disposing with drums (in part) and piano and turning to Dave Feinman’s corpulent bass sax for the rhythmic punch customarily plucked out by string bass. Drummer Bob Kornacher of the Dixie Stompers (another Koester affiliate) joins the action on seven of the cuts and brings a nimble Cie Frazier-like flavor to his accent-underscored syncopations. Completing the ensemble are banjoist/guitarist Mike Miller and a sharp three-pronged frontline of trumpet, trombone and reeds led by classically-trained Ron DeWar on clarinet, soprano and C-Melody sax.

The band’s book toes a line typical of their peers on the surface, leaning in the direction of the Armstrongs and Jelly Roll Morton and roping in ringers like “Tishomingo Blues” and “”Beale Street Mama”. The surprises surface in how the players filter the tunes through their configuration and stress pants-seat licks over starch-collar chart reading. Koester’s liners relate a plum anecdote of Mingus swinging by to hear an entire night’s gig only to head out with Feinman and DeWar the following morning for breakfast. Endorsements don’t ring much more resoundingly than that.
Posted by derek at 7:02 AM