Mostly Other People Do the Killing - Forty Fort (Hot Cup) 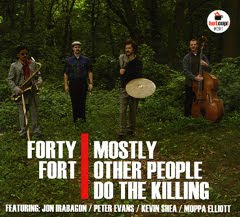 Ungainly in name, but hardly in purpose or practice, MOPDtK (to use the shorthand) strike the target again on their fourth full-length for Hot Cup. Whether it’s a bull’s-eye or an outer ring impact probably depends on listener tolerance for melodic monkey business and slapstick unpredictability. Either way there’s no denying the musicianship on display or the sincere sense of fun behind their antics. Coming to a MOPDtK performance for spit-polish decorum is like arriving at a Sarah Palin rally and expecting sharply reasoned discourse.

Several of their earlier albums cheerfully copped aesthetics from seminal albums by Art Blakey and Ornette Coleman for Blue Note and Atlantic, respectively. This time it’s Roy Haynes’ Out in the Afternoon for Impulse, with each of the four aping the album’s original quartet in attire and posture, right down to a trio of faux moustaches. Forty Fort name checks another Pennsylvania locale (as did their 2nd album Shamokin!!! and liners, once again penned by pseudonymous Leonardo Featherweight, elucidate all the effort behind the facsimiles.

Success in advancing their pro-canon, anti-repertory agenda hinges on a number of factors not the least of which is a gig-honed rapport that most ensembles would give their eyeteeth for. What at first seems like contradictory ensemble philosophy becomes complementary with the realization that nearly all of those members of the jazz canon earned their posts by initially bucking what came before. Contrary to what some critics might argue, the goal isn’t the slaying of idols. Rather, it’s to follow suit by abstaining, and embracing autonomic improvisation and staying open to any and all ideas.

Saxophonist Jon Irabagon won the 2008 Thelonious Monk International competition and chose to record with the suit-and-tie rhythm section of Kenny Barron, Rufus Reid and Victor Lewis for Concord. Trumpeter Peter Evans regularly criss-crosses the chasm-wide stylistic gaps between Bill Dixon, Bubber Miley and Maynard Ferguson without batting an eye or pulling a groin muscle. And that’s just the ‘jazz’ compartment of his chops bag. Bassist Moppa Elliott, the erstwhile leader, and drummer Kevin Shea straddle similar pan-musical terrain, absorbing everything from hip-hop to country, reggae to 80s AM pop, cherry-picking choice bits from each and spitting out the pits.

The music is bristling with the rapid fire change-ups and mish-mash collisions that are the band’s buttered bread. “Pen Argyl” blows through a dozen such costume changes in just over half as many minutes. “Rough and Ready” finds Evans and Irabagon surfing a surging rhythmic breaker anchored on an Elliott ostinato and Shea’s Tasmanian Devil traps, folding in wooly extended techniques nearly in the same breath as Aebersold-approved straight blowing. Minutes before the end of “Blue Ball” Irabagon breaks into bombastic song fragment* from that would make an acne-faced high school marching band proud. The sole “cover”, Neal Hefti’s “Cute” serves as circus sideshow showcase for Shea who tinkers with a percolating exchange of acoustic and electric beats amidst rambunctious band interjections. Idols intact, these guys are still storming the Ivory Tower and dragging jazz back to its populist roots.


*I still can’t quite tag it despite recalling having heard it played at numerous football games. It pop’s up around 6:40 & is effectively driving me nuts, so anyone with a line on its identity, please do a brother a solid & comment below.
Posted by derek at 12:28 PM