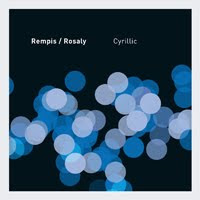 Past commentary on saxophone/drums duets often pivoted off the relative rarity of the configuration. That tack is difficult to take in the present day given that most improvisers on either instrument have at least one such encounter to their credit. Dave Rempis and Frank Rosaly certainly do. Cyrillic marks their first recording together in the format, though they have plenty of shared experience together in Rempis’ longstanding Percussion Quartet. The music mirrors the disc packaging in its directness and absence of distracting ephemera; it’s just reeds and drums running down a generous number of ideas and directions. Rempis is a rhythmically astute player. He’s also blessed with split-second reflexes and command of melodic improvisation that allows for high speed thematic extemporization. Rosaly doesn’t have quite the same skills set, but his artistry manifests in the percussive variety and careful calibration that informs his playing. Only on a few occasions do they sound like they’re hesitating as what to say next.

The pair gets into their fair share of affable fisticuffs and a good amount of the kind of rigorous blowing conducive to the combination. Rosaly settles into a sweet second line groove halfway through the opening “Antiphony” with Rempis trilling expressively on top. Full of angular inversions and clipped phrasings, the following “Tainos” feels a bit like a wrestling match between Rempis and horn and seems to run out of steam in its final minute. “Thief of Sleep” rights things through a loose-limbed shuffle balanced on the legato strains of Rempis’ baritone. Rosaly’s spatial sense is especially effective here with lots of breathing room present between his delicate accents and a finely sustained sensitivity to tension and release. The by turns dancing and wailing alto that opens the centerpiece “How to Cross When Bridges are Out” contrasts pointedly with the prior piece. Rosaly alternates tidal snare and tom-tom rolls with exacting stick play while Rempis muses between Konitz-like coolness and McLean-style heat at length. The remaining three pieces run from the slow-coalescing free textures of “Still Will” and “Don’t Trade Here” to the bob and weave baritone bluster of “In Plain Sight”.

Is this a set on par with Interstellar Space or The Long March? Such a loaded question is both unfair and irrelevant. Rempis and Rosaly deliver the goods in their own fashion, taking what is fast becoming a familiar framework and applying their own indelible stamp.
Posted by derek at 12:05 PM