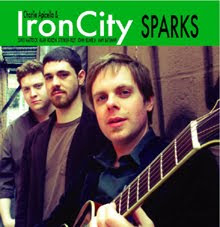 Plucking its name from a plum 1977 Grant Green date, guitarist Charlie Apicella’s trio embodies much of what makes that record so great. Green’s trio with organist John Patton and drummer Ben Dixon operated like a souped up Booker T & the MGs, covering popular fare like “Samba de Orpheus” and “High Heeled Sneakers” and plugging in a strong soul jazz sensibility along the way. Apicella’s crew adopts a similar strategy toward soul jazz workhorses by Green, Lonnie Smith and Lou Donaldson though they curiously steer clear of the tunes on the original album.

Organist Dave Mattock and drummer Alan Korzin demonstrate a keen affinity for both material and approach with Mattlock building up some very meaty basslines, but the aspect that truly sets the session apart from others of its ilk are the guests lending assists. Violinists John Blake, Jr. and Amy Bateman each lend their arco talents to a tune apiece, giving the vamps on the opening Green-associated “Sookie Sookie” and Apicella’s own “Sweet and Sounded” a sharper edge along with a pair of vibrato-accented solos. The real draw for me though is the suprising presence of saxophonist Stephen Riley, who’s feather-toned tenor enhances five of the eight cuts. Riley’s fluttering, mercurial phrasings fit unexpectedly well into the unabashed funky surroundings of the opener and Apicella’s title piece. He clips and pinches lines to jibe with the tightly drawn grooves, maintaining equal footing with the leader and Mattock on the solo front, though there are moments when it does sound like he’s holding back.

In light of the fine playing, the material suffers by comparsion and the disc registers at a relatively slim LP length, Again though, what’s here holds true to the source of inspiration. Apicella’s only misstep is a bromidic rendering of “Billie Jean” tacked on to the set’s end, presumably in a hat tip to Green’s original investigation of popular songs of the day. Riley isn’t on board for the outing and the Michael Jackson melody can’t help but sound trite in such an obviously ‘jazzed up’ state. Additonally, the performance leaves the question hanging as what sort of serpentine variations on that ubiquitous theme the saxophonist come would have come up with given the chance.
Posted by derek at 7:55 AM