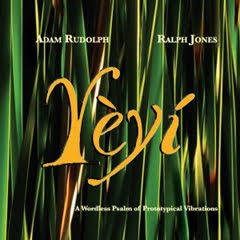 Subtitled “A Psalm of Prototypical Vibrations”, Adam Rudolph’s latest project for percussion and partner is firmly ensconced in the guiding spiritual philosophy that has long informed his playing. Under his conception, rhythms are a conduit and connective tissue for life. Percussive instruments, referred to here as membranophones and idiophones, are but one family of vessels through which these healing and sustaining vibrations travel. Rudolph’s partner Ralph Jones handles a variety of reed and wind instruments, referred to collectively as aerophones, as another complementary means to communicate said vibrations. Each man crosses over into the other’s area of expertise, but for the most part adheres to his respective corner and arsenal.

Conceived of and executed as a continuous collaborative narrative the hour-long piece contains ten track demarcations to aid aural ingress. Whether the listener embraces the spiritual underpinnings of the duo’s dialogue is largely secondary to the overarching efficacy of the shared act of sound creation itself. Rudolph has honed an accomplished and creative approach to rhythm and percussion over four decades as an improvising musician. Jones’ presence isn’t quite so high profile but he holds his own in shaping pliable and engaging melodic lines against his partner’s shifting and undulating curtain of percussion. Arabic, African and South American elements all occur as thematic referrents.

The conversation commonly transpires with Rudolph sculpting a porous rhythm on some variation of hand drum and Jones improvising atop and against it. Opening sections for conga and djembe coupled with flute and an extended improvisation by Jones on bass clarinet are particularly effective in this regard and the meditative cast of the resulting melodic-rhythmic braid combines both calmative and propulsive elements. Brief interstitial detours into silence arise at various junctures, but the music-making is mostly uninterrupted. Several of the instruments, particularly in Jones’ camp, wear their tonal limitations prominently. Another danger is onset of self-indulgence with patterns that follow familiar spiritual tropes. The pair negotiates these potential pitfalls with aplomb and while the music sometimes feels unduly spare and loose, it largely sustains cohesion over the challenging duration of the set.
Posted by derek at 6:41 AM