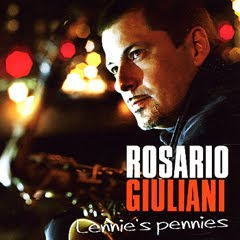 Italian altoist Rosario Giuliani isn’t reticent about running down his influences. The title and lead track on his latest quartet disc sounds an appreciative salute to Lee Konitz. In the liners he checks off thanks to a handful of others including John Coltrane, Cannonball Adderley, Joe Henderson and Sonny Rollins, though these seem influences more in spirit rather than letter. Conversely, Konitz comes across prominently in the agile glide of his phrasing and tart intonation. Pianist Pierre de Bethmann plays Rhodes on the twisting theme statement of the opening number, mimicking the timbre of a guitar before dropping out and leaving the leader to dance with bassist Daryl Hall and drummer Joe La Barbera, the latter keeping a percolating beat with brushes. An effervescent string of exchanges rounds the performance out with an emphasis on insouciant velocity, Giuliani capping the cut with a playfully coarse trill.

Ballad selections like the lovely “Love Letters” illustrate Giuliani’s abiding romantic bent. La Barbera demonstrates the mellow versatility he first honed under the employ of Bill Evans with subtle accompaniment that caresses the corners of Giulliani’s gossamer lead. Bethmann fields acoustics ivories here and his delicate right hand touch complements the lush mood of the piece alongside Hall’s understated pulse. “How Deep is the Ocean” ticks the tempo up a notch while keeping things low key. Hall sneaks in a concise solo early and the comping from Bethmann locks beautifully with La Barbera’s steady brush play. Giuliani’s left to improvise at will on the theme and to pleasing effect.

Joe Zawinul’s vamp-grounded “74 Miles Away” brings the band songbook decades forward in provenance with Giuliani hardening his tone and bringing the funk through a spate of rhythmic honks and flutters. Hall and La Barbera respond to the more open-ended structure in like fashion. A trio of originals follows, fitting right in with the rest of the program, starting with the plush ballad “Picchi” and Bethmann again on atmospheric Rhodes giving the piece a pleasant retro flavor. The quartet’s reading of the Jimmy Rowles classic “The Peacocks” captures the moody brilliance at the tune’s core, opening with Giuliani and Hall in isolation before La Barbera’s mallets enter with Bethmann’s skeletal comping. It’s a highlight of a program bolstered by strong performances nearly start to finish. Konitz may be a starting point for Giuliani, but the endgame on this date is wholly his own.
Posted by derek at 3:19 PM