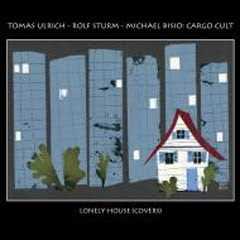 Covers seem natural grist for the creative music mill that is cellist Thomas Ulrich’s Cargo Cult. The cleverly-coined chamber ensemble evinces a flexibility of form and function that invites investigation of a myriad of compositional sources. Ulrich and his bandmates, guitarist Rolf Sturm and bassist Michael Bisio, are voracious musical consumers. Combine that collective appetite with comparably broad commands of their instruments and the result is a reliable recipe for far-ranging songbook interpretation.

This set, their third for the Cadence family of labels and the first in a slated pair of releases, centers on just that, the songs of others. Jazz standards vie with eclectic tunes from other styles and eras. “Una Furtiva Lagrima”, a lush romanza pulled from the Italian opera L'elisir d'amore, wends along on a plump Bisio ostinato and Sturm’s shimmery chording. The trio’s take on Monk’s “Let’s Cool One” comes from a completely different corner of the stylistic compass, coupling old school swing to passages of languid free improvisation. The laidback sum captures the original in spirit if not complete letter and is curiously reminiscent of the sort of chamber jazz interplay common to the vintage Red Norvo Trio with Jimmy Raney and Red Mitchell.

The reading of Stevie Wonder’s “’Cause We’ve Ended as Lovers” by way of a Jeff Beck’s(!) cover of same is even more lateral in its thinking. Sturm adopts a warm, aqueous amplification as Ulrich wrings the arcing swathes of pathos from his strings, dipping deliriously close to melodrama in the bargain. It’s a tack he approximates on a late program foray through Ahbez’s “Nature Boy”. A more subdued variant on that abiding sentimentality informs later renderings of the standards “September Song” and “Lonely House”. “Night and Day” and “Days of Wine and Roses”, serve as the set’s other two dyed-in-wool standards, the former laced with lilting island flavor while the latter pivots on callus-abrading counterpoint. Sturm abstains from amplification in both cases, favoring instead an acoustic picking style akin to Howard Alden or Charlie Byrd where he occasionally strikes harp-like overtones in his strums.

“Goodnight Irene” and “Come On in My Kitchen” collectively scratch two sides of the folk blues coin with plectrum, fingers and bow. On the first, the mood and delivery is rural and wistful, a back porch lullaby. For the second, Bisio sits out leaving Sturm to sound off on brittle slide-inflected banjo as Ulrich to runs down raw-fingered pizzicato abstractions on the Robert Johnson-appropriated theme. “Cortez the Killer” is similarly left-field in its presence and design. Sturm pays tribute to the grandfather of emotionally-employed amplifier reverb while Ulrich bows the mournful theme in a surprisingly effective distillation of the Neil Young classic. Theirs is a stripe of chamber jazz that resolutely refuses the pinions of the phrase. The set’s eventually-to-be-released companion piece, Discovers, promises more fire, this time lit with compositional tinder from within.
Posted by derek at 12:40 PM