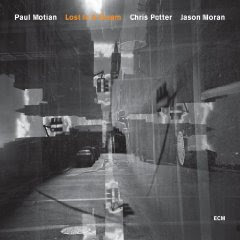 Few partnerships between label and musician remain as felicitous as that shared by Paul Motian and ECM. Described in certain circles as an anti-drummer, a back-handed reduction also ascribed to Shelly Manne back in the day, Motian’s language at the kit is commonly the epitome of economy and nuance. Bombast and obviousness are his adversaries. Spaciousness, an overriding melodicism and preference for implication rather than explication as communicated through his stick and brush play can frustrate audiences expecting the momentum and excitement of more conventional players. ECM has long favored a parallel attributes in its production values and sound.

The venerable Village Vanguard makes perfect sense as venue for this live date considering how often Motian’s performed there over the years. Pianist Jason Moran and tenorist Chris Potter jibe beautifully with Motian’s moody musical motifs. Potter sounds a bit as if he’s been studying Motian’s longstanding colleague Joe Lovano, both in the grainy legato voicings he funnels through his reed and the floating manner in which he deploys them. His tonal versatility coincides beautifully with the naked emotions at the core of Motian’s compositions and he capitalizes on his instrument’s registers from a burnished purr to a keening cry, sometimes within the same phrase. Moran mostly leaves his more athletic tendencies at the stage door and traffics instead in impressionistic territory more akin to Motian’s old employer Bill Evans.

As with Motian’s usual wont, tempos are often slow and tune structures mirror the sentiment of the album title in their gradual, open-ended development. “Drum Music” and “Abacus”, are revelatory exceptions. The free jazz-friendly first piece advances on roiling rhythmic patterns from all three players. Moran strikes staccato clusters and Potter resorts to heated spates of clipped honks and scribbles underscored by some wicked hard-spun sticking by the leader. The second is a largely a solo piece for Motian that echoes the mathematic connotations of its title. Outside of passionate bookending theme statements, Motian has the piece to himself, calmly and confidently reveling in the textural and colorist capabilities of his kit. Five minutes of percussive bliss tick by couched in tumbling tom-tom rolls and effervescent cymbal splashes. Both pieces are cogent reminders that while Motian’s prevailing style as a romanticist is well established, it’s hardly a set of shackles when it comes to celebrating more overtly animated sides of his musical personality.
Posted by derek at 11:52 AM