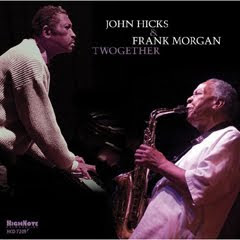 The passing of pianist John Hicks and altoist Frank Morgan within a year of each other was a sad blow to the High Note roster and the jazz community writ large. Both men had enjoyed a late career renaissance via the label and Morgan, in particular, experienced an artistic renewal through a series of critically-acclaimed recordings capped by a three-volume document of a stand at The Jazz Standard. This set is something of a posthumous swan song for each player, coupling pieces from a duo performance at the Jazz Bakery in Los Angeles, November of 2005 with selections from a solo Hicks recital roughly a year later.

Pun-saddled titled aside, the program delivers tradition-savvy post-bop plied by experts of the form. The tracks unfold in an ear-pleasing sandwich sequence with solo cuts bracketing a pair of duo pieces on either side of the program. Hicks’ solo investigations, starting with a rollicking rococo investigation of Bud Powell’s “Parisian Thoroughfare”, accord him the freedom to range through themes and variations at an easygoing pace with plenty of space for loquacious elaboration. All of the pieces save the closing solo rendering of “Passion Flower” ring in near the eight-minute mark and that last still clocks generously just shy of seven. Sound on both dates is intimate and faithful in the capture of twosome’s toothsome conversations.

Compared with the introspective cast of Hicks’ solo ventures, the numbers with Morgan convey an even greater degree of urgency and complexity. “A Night in Tunisia” gives Hicks’ left hand a strenuous work out in the construction of romping chords, Morgan slipping and sliding through elisions on the familiar theme in aerated tone that approaches Paul Desmond territory. Hicks follows his partner’s extended statement with a delightful stride-inflected foray stamped with staggered switchbacks and a dizzying rhythmic pliability that primes the audience for the altoist’s lissome return and a handful more melodic permutations.

The choice of “’Round Midnight” would appear to pull the partnership even further into the realm of jazz orthodoxy, but instead they effectively underscore why it remains a perennial favorite for improvisers the world over through an elegant cerulean deconstruction. By contrast, Kenny Dorham’s bop-structured “N.Y. Theme” trades strictly in fun fisticuffs between the partners, Hicks’ hands building decorous layered chords as Morgan lets fly his inner-Bird with unabashed brio. The music of Hicks and Morgan is now a regrettably finite commodity, but their shared artistic import remains undiminished in this delightful meeting between justly-venerated musical souls.
Posted by derek at 8:55 AM