Ran Blake & Christine Correa - Out of the Shadows (Red Piano) 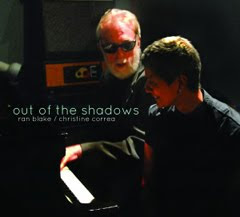 Cinema and music are inextricably entwined in Ran Blake’s creative consciousness. He’s a pianist though, not a filmmaker and his taste in moving picture media filters through a far narrower lens than that of the aural, fixating on noir and vintage musicals. Musically, he’s all over the map. Practically anything and anyone is fair game and the subject of delightfully disconcerting mash-ups from Debussy and Horace Silver to Michael Jackson and Mahalia Jackson. As an erudite student of American song, duets with vocalists remain one of his favorite outlets of expression. This set marks his second collaboration with singer Christine Correa though it’s been nearly two decades since their first. The program is expectedly idiosyncratic, roping in tunes associated with Blake’s aforementioned filmic interests along with left-field selections that prove ready for his pan-stylistic improvisations. As with other of his efforts it requires a bit of acclimatizing to get fully into Blake’s groove.

An adjunct professor of music at Columbia University, Correa’s academic grounding in no way hinders her chance-taking impulses. Keeping company with Blake is a guaranteed way to keep on ones toes. Her ways of phrasing a verse are just as variably “out-of-the-box” and sometimes invoke the spirit of Billie Holiday in the way she plays with a line. Blake’s patterns range freely from a delicate softness to stabbing stridency. Two versions of the title track bookend the set, the first rendered as a duo and the second as an a cappella feature for Correa. She also takes “Una Matica De Ruda” sans Blake’s support, turning in an onomatopoeic performance that echoes the pianist’s old partner Jeanne Lee in dynamic reach and rhythmic urgency. Correa sits out on the dark-to-light rendering of “Goodbye”, a Blake performance typical only in its atypicality.

The duo’s comparatively brief exploration of the Max Roach/Abbey Lincoln anthem “Mendacity” cuts to the biting political quick of the piece. Correa conveys the indignation inherent in the lyrics as Blake pounds out a similarly stark pedal-weighted mood at the keys. The merging of “The Band Played On/Little Yellow Bird” isn’t really a medley. Blake refracts the first tune through a fractured prism that retains the beauty of the melody while adding an aura of odd menace and mystery. Correa runs down the lyrics of the second with lush vocal inflections that echo that of a lullaby, Blake tinkling elegantly at her side. They interpret the swing-schmaltz of “Fine and Dandy” and “Hi Lili Hi Lo” with a shared straight face curled knowingly at the mouth, Blake popping the corn contained in the song kernels with jaunty staccato flourishes. The pianist’s sound world is an intimate and eccentric one. As with much of his past work this set presents a welcome share of brow-raising challenges. Most memorably, it’s a session continues to reveal secrets with each new audition.
Posted by derek at 4:33 AM