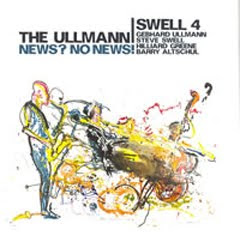 Finding chemistry in a frontline partner, let alone a band writ-large, is no easy task. German reedist/flautist Gebhard Ullmann has an uncanny knack for doing just that. His rewarding association with trombonist Steve Swell dates back over half a decade to a fateful quartet session for CIMP. Bassist Hilliard Greene and drummer Barry Altschul were the other members on that date and they bring a comparable acuity to this new studio outing. As a finely-tuned foursome they have a clear understanding of each other’s capabilities and a shared determination to make the most of them in collaborative fashion. The kinetic cover painting by Music Witness Jeff Schlanger is a fitting visual analogue to their collective sound.

Ullmann and Swell divide composerly duties on eight of the album’s ten tracks. The two others in the program, tagged with the titles “GPS #1” and “GPS #2”, unfold as group improvisations. Several distinctive traits separate the music and its execution from standard issue stack-blowing so common to ensembles of comparable instrumentation. Scripted heads are starting points on several pieces, but neither Ullmann nor Swell is content to sally the safe route of predictable loud-to-soft passages. Switchbacks and detours are frequent. The rhythm section even drops out completely on and “Berlin 9:35” leaving the horns to dance and dive in a free-associative dialogue.

Greene is an unflagging pillar on bass and works well with Altschul in keeping canvas from going static. Altschul, a pioneer in blending dynamic polyrhythms with textured free pulse at the cusp of the Sixties in the company of Braxton and Corea, is still going strong half a century later as his at once voluble and inventive solos that close out “Planet Hopping on a Thursday Afternoon” and “Airtight” assert. Swell wears his Roswell Rudd reminiscent-ruddiness proudly through frequent improvisations that rely as much on braying and whinnying timbres as they do on thematic development. Ullmann’s flute is nowhere to be found, but there’s plenty of tasty tenor and bass clarinet play to dine on in its stead. To risk a cliché, this is a quartet that stops to smell the roses, so to speak. Energy abounds in their conversations, but it’s never of the unfettered abrasive sort. That unerring fealty to musicality leads to eminent listenability and an immediate impulse for repeat exposure.
Posted by derek at 10:37 AM