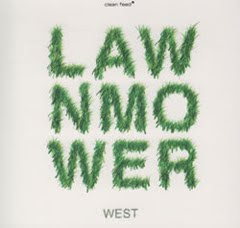 Drummer Luther Gray, an always reliable sideman in the ensembles of others, makes a welcome debut in the driver’s seat on this date for Clean Feed. The underlying significance behind the album’s title isn’t self-evident so Gray helpfully elucidates it in his succinct liners. The tandem of Walkman listening and mower pushing formed the primary conduit by which he digested music for years. The music is meant to limn the arc of his listening evolution over those inumerable solitary hours. It’s an instantly engaging concept and one that resonates in the singular instrumentation of he chooses for his ensemble.

Guitarists Geoff Farina and Dan Littleton divide down stereo channels, each wielding amplification in a precision painterly fashion. Altoist Jim Hobbs, who counts Gray as a regular colleague in a number of aggregations is the fourth participant in the quartet. Gray conceives of the pieces in a very organic fashion and they unfold. “One” and “Glass” sound like narcotized variants on Sonny Sharrock as the guitarists construct undulating coils of reverb-saturated texture that spool out and recede. The percussive bell-like tones that open the second piece come from guitar on drum kit, enveloping Hobbs’ raspy melodic lead in a lush, dreamy patina further bolstered by a muted tribal beat built painstakingly by Gray.

Gray is often remarkably understated, almost recessed in the mix, his churning rhythms guiding the forward momentum of the pieces, but also applying an odd vertical weight. Hobbs threads the middle, sounding melodic trills and legato swathes. The shared sense of atmosphere and mood evokes open desert vistas and the spacious canopy of a star-studded night sky. After the stark magnificence of these opening pieces, “Prayer of Death is something of a return to terra firma as Littleton shapes a folksy repeating Fahey-reminiscent line and the four move forward in an easy-loping unison. “Giant Squid” brings a sharper edge to the collective, both guitarists cranking the feedback for a craggier sound. Hobbs unleashes his inner-Ornette, darting and dovetailing between the amplified slabs and even openly quoting “European Echoes”.

The overly minimalist and ambient-minded “Dan” loses the forest for the trees a bit, but the foursome find their shared footing again on the delightfully somnambulistic “I Love”. Hobbs laces a velvety line through an eyelet of bowed and shimmering guitar strings as Gray keeps loose-limbed cymbal/snare time. “Two” sums the set beautifully through yet another inspired braiding of Americana-tinged guitar striations colored by Gray’s percussion and the tender lyricism of Hobbs’ horn. Playing reliably outside of the box, Gray gracefully subverts assumptions based in his past work with this one. It’s a pleasure joining him on the highly personalized journey, a trip that immediately engenders the question, what’s next?
Posted by derek at 7:22 AM