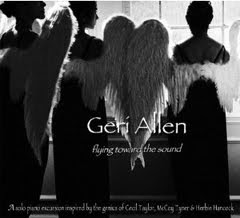 As with Mary Lou Williams before her, Geri Allen is a pianist unencumbered by extrinsic stylistic boundaries. Williams’ influential music ran a gamut from pre-swing to free, pulling in blues, gospel and folk facets to form a compositional language resolutely of her cast. Allen occupies a comparable space in her philosophy toward the ivories. This latest disc, a solo recital funded through a prestigious Guggenheim Fellowship, presents her broad creative spectrum undiluted by extraneous collaborators. Even so, it’s a program guided by an abiding dedicatory focus. Allen touches upon three specific influences in the eight-part suite that dominates the set. A final closing composition, “Your Pure Self (Mother to Son)”, written in honor of her son, is the only piece marred slightly by a somewhat anticlimactic end.

The title piece, reprised at suite’s terminus, evokes the musical mien of McCoy Tyner in its vibrant melodicism and propulsive lyricism. Sun Ra’s spirit also sounds alive in the tinkling descending flourishes that punctuate Allen’s runs and are reminiscent of the Saturnian’s work on such solo reveries as “Advice for Medics” and “Space Towers”. Herbie Hancock receives an extended nod on “Red Velvet in Winter”, a densely-organized piece imbued with a verdant rolling left-hand groove. “Dancing Mystic Poets at Midnight” tips its honoree Cecil Taylor in the colorful verbiage of its title as well as the percussive collisions of its construction. Allen’s active interpolations of Taylor are closer in construction to the iconoclastic pianist’s Fifties experiments than the more unbounded structures of his European-influenced later work. The set’s centerpiece is the 16-minute “God’s Ancient Sky” structured much like a mini-suite in itself and ripe with improvisatory detours.

Allen’s prodigious technique figures prominently throughout the set though it never feels as if she’s merely showing off at the expense of the larger themes imbedded in the work. The congruity between her hands borders on the preternatural as her left-hand figures frequently match those of her right in terms of complexity and speed. The effect is like a thrilling relay race, her scuttling digits tandem trajectories that and leaving trails of resonant notes. Her pedal work is exemplary as well. On the lush reprise of the title piece robust right hand patterns tumble expressively against an undercurrent of swelling left hand fills. This is a gorgeous and emotion-rich record, one that bonds its overarching beauty to rich pianistic history as seen through the prism of Allen’s ever-evolving art.
Posted by derek at 4:46 AM