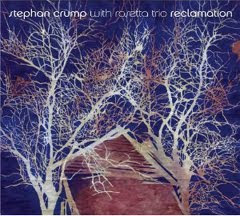 Echoing the ancient cross-textual applications of its namesake, Stephan Crump’s Rosetta Trio is something of a departure in contemporary jazz: A string ensemble that translates the chamber connotations of its instrumentation into a strong rhythmic versatility more endemic to American folk forms. Crump leads the group from a position of quiet authority on double bass. Guitarists Liberty Ellman and David Fox assume equal footing at the flanks, the first fretting acoustic strings while the second picks electric. Their first outing (on Papillion Sounds) set the framework on which this second set adroitly elaborates.

“Memphis” name checks both the capital of Crump’s native Tennessee and (perhaps unintentionally) the Ptolemaic variant of the translating stone that yield’s the band name. The piece develops as a folksy loping dialogue, the sort of pastoral rap session that expert string benders like Joes Pass and Pisano used to specialize in the Seventies. Ellman and Fox layer gently ringing tones as Crump’s cushy pizzicato saunters up the middle. “The Leaves, The Rain” and “Toward Fall” are of similar cast, the first a delicate ballad with Crump taking on a prominent melodic role on par with the guitars while the second trucks in warm contrapuntal picking around the bassist’s robust center.

“Silogism” is the first of several pieces emphasizing the trio’s rhythmic spontaneity. Crump’s strings are big, round, resonant and grooving. Ellman etches spiky syncopated strums while coiled scrapes emanate from Fox’s corner. On “Overreach” Fox’s loose chording hardens into a tight groove anchored by Crump’s elastic stops and embellished by Ellman’s textured picking. As is often the case throughout the program, agile counterpoint once again drives the action. “Shoes, Jump” compels a contrastive mood with a breezy swing atop a bobbing samba-derived beat. Crump threads in some wordless vocalizing between his syncopated slaps and plucks.

Bowed bass makes an initial appearance on the somber ballad “Escalateur” where Crump shaves scintillating harmonics against a convergence of mellifluous guitar tones. At 14+ minutes, “Pernambuco” spools out suite-like, starting with an assemblage of quiet rubbing sounds and expanding through a passage of dour arco flanked by filigree picking into revolving leads and a pair of stellar solos from the guitarists. Alternating genteel lyricism with gritty, risk-taking immediacy, Crump and his colleagues arrive at another winner that wears its few blemishes without chagrin. Theirs is fearless string play of the first order and comes easily recommended on such grounds.
Posted by derek at 4:28 AM