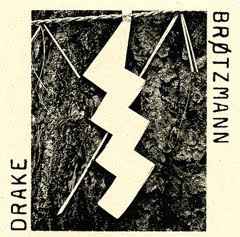 Duets with drummers remain one of Peter Brötzmann’s most reliably rewarding formats for expression. An active percussive partner accords him the opportunity to shuck down to his primal self in a manner larger ensembles often don’t allow. Of the dozens of drummers he’s engaged in such conversations only his old colleague Han Bennink matches the rhythmic diversity and acuity that Hamid Drake brings to the equation. This set, recorded at the Beachland Ballroom in Cleveland, spring of 2004, shows off another side of the reedist personality too, his willingness to gig at virtually any venue. Released in a limited pressing of 525 copies on the occasion of the pair’s 2010 tour, a nine date itinerary that finds them playing pizza parlors and bars along with art galleries and cultural centers. Clear a space set up some folding chairs, pass the hat for a nominal guarantee and odds are the road dog reedist will consider holding court for your crowd.

This disc is a warts-and-all affair compared to the pair’s 1994 studio session for Okkadisk, but it also illustrates the level of rapport the two have built in the decade between Packaging is minimal, but functional featuring monochromatic screen-printing and a thin cardstock case. They even dispense with track titles and the recording initially carries a slightly dodgy balance that favors Drake. Brötzmann sounds the charge on alto, Drake swiftly closing ranks at his flank. The drummer’s ensuing solo demonstrates a pervasive Blakey-by-way-of-Denis Charles influence, with volcanic press rolls erupting around a sturdy hi-hat metronome. He slips seamlessly into a funky backbeat for Brötzmann’s ululating re-entry and it’s as if he’ll exhaust all his aces on this first track. Listeners familiar with the deep playing deck Drake has at his disposal know better.

Recording balance improves on the second piece for frame drum and tarogato. Drake works fingers and palms against stretched animal skin, exploiting the natural resonance of the surface to create layered, dancing rhythms. Brötzmann is initially at his most tender on the Hungarian reed, switching to his usual abrasive argot in a circular improvisation that wears on a bit too long before returning briefly to a disarming lyricism. Hoary, hard-bitten tenor of the sort the surname Brötzmann is synonymous with dominates the third piece with Drake deferentially silent at his kit for the first three-and-half minutes out of eleven-and-change. The drummer’s explosive solo more than makes up that difference as does the start-stop call and response that closes the cut. Alto returns for the finale and the duo takes the set out in much the way they came in with a melancholic, melody-girded dirge. This one’s a keeper and well worth the asking price, but an even better idea is to get it from these two in person on tour. There’s still time!
Posted by derek at 4:33 AM