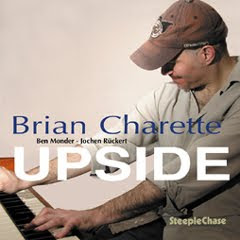 The hoary Hammond organ is an instrument oddly resistant to revolutionary application. A survey of its history in jazz yields only a comparative handful of players who have taken it to truly new places. Brian Charette isn’t among that select few, but he does have something valuable to say as evidenced by the pleasures and strengths indicative to this debut. It’s no coincidence that he counts Steeplechase label mate Gary Versace as a colleague. Both men take the lineage of Jimmy Smith through Larry Young as their starting points and build a personal voice from there. Johns Patterson and Patton are also prevalent progenitors in Charette’s approach through the audible affinity for modal forms and knotty harmonic contours that informs his eight originals, starting with the high protein swing of “Yolk”.

Guitarist Ben Monder and drummer Jochen Rückert are sidemen in a sense, but Charette involves the former in equal footing on most pieces. Monder employs a welcome versatility in timbre and attack. His thick, viscous amplification on Charette’s boppish burner “Public Transportation” echoes the sort of corrugated tone preferred by classic Smith confreres like Thornel Schwartz and Gene Edwards. Monder’s far more nimble with a plectrum than either man could ever claim. His switches from chordal and octave play to driving single note runs are often dizzyingly deft. A satisfying piece on several fronts, it’s also a rare chance for Rückert to slip outside his creative time-keeping role for a spate of blistering breaks. The alternately lithe and lilting “Look Elsewhere” shows off his adroitness with a bouncing bossa beat.

Charette nearly falls foul of the more sentimental side of the organ vernacular on “Silicone Doll”, but the other ballad features on the program keep an even keel. A solitary exploration of “You’ve Changed” demonstrates a Smith-degree of dexterity as he juggles bass pedal swells with converging counter melodies advanced by both hands. The trio navigates the romantic straights of Ellington’s “Prelude to a Kiss” with similar aplomb and attention paid to Rückert’s fluttery brushwork. “Furthering Adventures”, “Altered Waltz”, “Girls” and particularly the closing “Wish List” veritably ooze with late-Sixties postbop experimentalism. All benefit from a near even balance of solo space for organ and guitar and plenty of devious twists and turns. Charette’s arrangement of Strayhorn’s “Upper Manhattan Medical Group” swings nearly as hard. In the accompanying notes, he describes this set as slightly more traditional than the trio’s typical fare. Given the galvanizing level of adventurousness on hand, here’s hoping they opt to document that status quo on a second outing.

[Steeplechase titles are available direct through Stateside AT prodigy DOT net]
Posted by derek at 4:35 AM