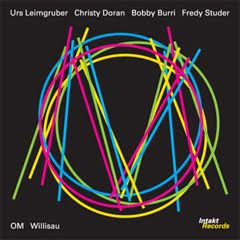 Forbearers in the fringe mergers of free jazz and rock in the early the Seventies, the Swiss quartet OM blazed a trail in Europe for the better part of a decade before disbanding in favor of solo careers. For those listeners who weren’t around for that heady first go round this summer of 2008 reunion set recorded at the titular annual jazz event suggests that while time may have passed, the foursome is still fearsome as a collective. The potential foibles of undertaking such an unstable stylistic alloy remain extant and evident in the risk-taking program the ensemble decides upon.

Saxophonist Urs Leimgruber and guitarist Christy Doran have similarly pan-glossal approaches to their instruments. Leimgruber plies soprano and tenor from a post-Evan Parker perspective, moving comfortably from minimalist to maximalist and bringing in a host of extended techniques from slap-tonguing to circular breathing. Doran uses an array of devices on his strings to create a rainbow of a/tonal effects. Coupled to a conceptual creativity that rarely stays rooted in one spot for so long, his heavily embroidered-playing can occasionally be a chore though there’s no denying the craftsmanship behind in his creations. Bassist Bobby Burri also uses electric and acoustic modification on his upright. Drummer Fredy Studer sustains a dynamic range from whisper to roar behind his kit and is particularly adept at a signature staccato cymbal pattern that’s an aural approximation of humming bird wings, which he employs whenever the tension requires ramping. A rock backbeat serves as fallback at various points in the program, cueing plectral firepower from Doran’s corner.

Comprised of a dozen parts, the performance segues between guiding themes in a largely seamless fashion. The four accord the audience no quarter from the start, opening with a madrigal-like exchange of Dadaist verse and voice effects. At just over three-minutes it feels thrice as long and gives way to a relay-structured free exchange that spans the next several segments until the chugging, fractured groove of “Part IV”. The set’s middle sections, Parts V-VII specifically, are most satisfying to my ears, but then again they’re also arguably the most accessible in terms of form. Leimgruber latches on a mournful minor-key motive reminiscent of Fred Anderson’s cerulean style of phrasing and the others shape atmospheric embellishments around him. The next section builds on this prevailing mood, Leimgruber growing agitated against an undulating accompaniment hinging on Burri’s corpulent bass ostinato. The delicate soprano and guitar dialogue at the center of “Part VII” offers yet another permutation on the ensemble’s inclusive playbook.

As is usually the case, the free improv and rock elements aren’t the most complementary bedfellows, but it’s that tension that feeds the performance’s unpredictability. Rather than shy from those moments of collision and potential implosion, the quartet embraces them. While not all of what transpires sticks as memorable, the shared courage present in throwing it all at the audience to begin with elicits easy admiration.
Posted by derek at 4:45 AM