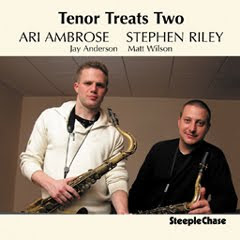 Resuming right where its companion volume left off, this disc delivers another stimulating hour-plus colloquy between its co-leaders. Tenorist Ari Ambrose gets top billing on the tray card, but it’s very much an affair of equals, onset to finish. Stephen Riley is the more overtly mercurial and idiosyncratic of the two frontline partners. His lushly-conceived tone and phrasing are instantly recognizable, a post-millennial alloy of Lester Young disciples running from Don Byas through Teo Macero to Warne Marsh an on to Wayne Shorter and beyond. That hollowed-out huskiness frequently contrasts swimmingly with Ambrose’s often more straightforwardly athletic sound.

On the previous volume, Ambrose playfully aped his partner at several junctures, adopting a grainy timbre and fluttery doppelganger inflection when voicing a line. He keeps that mimicry to a minimum here. This set also stands apart in the greater degree on interplay between the horns. Several of their spiraling chases recall the sort of near-telepathic harmonic congruity between the aforementioned Marsh and Lee Konitz. Solos are still the frequent conveyance for forward momentum, but the heightened willingness on the part of the principals to engage each other directly gives this volume a distinctive and definitive edge. There numerous are moments where their overlapping lines become an organized tangle of free-flowing counterpoint.

Bassist Jay Anderson and drummer Matt Wilson aren’t simply window-dressing. Both men actively feed and respond to the tenors with shifting backdrops and move to the foreground for improvisations when situation permits. The tunes don’t offer much in the way of surface surprises, though it is a treat to see Jimmy Rowles “502 Blues” amongst the other bop and earlier familiars. It along with El Gaucho, Riley’s just-released quartet record (also on Steeplechase) are oblique hints to the saxophonist’s abiding affection for Shorter’s Adam’s Apple. A 13+ minute foray through Jobim’s “Wave” departs from the predictable through the tenors’ close dissection of the dog-eared bossa theme, itself a melody seemingly custom tailored to Riley’s romance-ready vernacular. Listeners with a yen for tandem tenor that treads reliably off the beaten track are strongly advised to check this and the earlier volume out without compunction.
Posted by derek at 10:37 AM