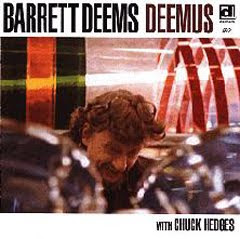 Fame is an ephemeral condition, especially for sidemen in jazz. Drummer Barrett Deems spent a decade stretch with Louis Armstrong. He also served as the engine room for bands under the leadership of Joe Venuti, Jack Teagarden and Benny Goodman. Today, he’s barely a footnote outside his Chicago stomping grounds yet Delmark honcho Bob Koester doesn’t hesitate in likening his raw talent to the legendary surnames Dodds, Rich, Clarke and Roach. There’s not much immediate evidence supporting that stature on this debut, a small slice of vinyl released in the late-Seventies that reportedly sold out its pressing within a year, reissued with a pair of trio-only bonus tracks. Instead, it’s the congenial work of colleagues having a ball in the studio with songbook of swing-and-prior standards.

During his lengthy career, Deems also garnered rep as one of the fastest drummers around as well as an irrepressible comedian. Satchmo is reported as observing, “Deemus makes coffee nervous”, and his nickname apparently derives from Demuskrotis, a mythological drum god presumably of his own devising. Backing the septet heard here, those traits aren’t at the fore. Fills and accents flow readily from his kit, but flash-and-burn fireworks fall away in favor of fleet precision and nuance. The band sits a bit outside typical small group swing instrumentation as well with guitarists Bob Roberts and John Defauw joining the conventional rhythm section on in lead and rhythm roles respectively. Former Down Beat editor Don De Michael handles vibraphone and clarinetist Chuck Hedges, another Windy City doyen, serves as the sole horn.

Deems and his crew sweep cobwebs off the tunes with lively arrangements that cater creatively to their instrumentation. His dapper brushwork on “Deed I Do” and “Six Appeal” are just two instances of him selecting just the proper tool for the job. Hedges, Roberts, DeMichael and Behr settle into roles as principal soloists, but Deems doesn’t seem to mind a bit. His is the accompanist’s temperament through and through and the music’s all the better for that enduring deference. “New Orleans” flowers almost like a tone poem, Defauw’s Freddie Green-style strumming locking with bassist Wilson McKindra and the leader in a light, but luscious swing as the others solo gracefully and gregariously atop. Even up-tempo numbers like “Shine” and “After You’ve Gone” carry that gravitas-defying effervescence while also curtailing bombast or hyperventilating grandstanding. Any disappointment at not having the hype surrounding Deems’ storied attributes supported by his chosen demeanor here vanishes summarily under the sustained potency of music.
Posted by derek at 4:37 AM