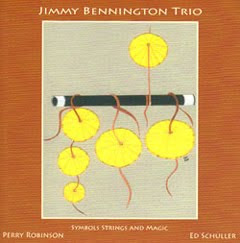 A decade’s worth of demos. Such was the gauntlet drummer Jimmy Bennington describes that led to his CIMP debut. Where others might cling to lingering frustration or ire in the wake of such a rigorous set of paces, Bennington’s sketch of the anecdote is almost matter-of-fact. Part of that might be because his patient persistence paid off, but there’s plenty of evidence that an even-keel attitude is simply indicative of his make-up. The last demo actually became a release on sister label to CIMP, Cadence Jazz and producer Bob Rusch tapped Bennington for this companion disc well before the street date for the first. Bennington’s sidemen on the date, clarinetist Perry Robinson and bassist Ed Schuller evince a comparable confidence in his capabilities. Both men are experts on their instruments and leaders in their own right, but each readily defers to his direction in this unadorned setting.

Bennington presents a set list rich in stylistic flavors. Freer leaning pieces like the opening title track and the Sunny Murray cover “EMOI” coexist with a fairly faithful rendering of the ironically wizened standard “What’s New”. Robinson and Schuller take to both contexts with enthusiasm to spare, responding to Bennington’s subtle kit cues while keeping him on his toes. The referential “Cadence Blues” pivots on both place and named idiom, Robinson at register-leaping best as the other two cobble a brisk-chugging groove. Two other tracks pull from Robinson’s father Earl’s songbook. “Now” contains brooding Klezmer overtones while “Side by Side” comes across as a congenial contrafact of the old spiritual “Down by the Riverside” with the three slipping easily into a New Orleans street band jocularity. Schuller’s resonant arco intro to Bennington’s ballad “Susanna” is almost a free-standing composition in itself.

Bennington’s dynamic reach behind the kit gets full service under the stark CIMP engineering aesthetic. His polyrhythmic approach tips off to the two-year stretch he spent as road manager for Elvin Jones’ Jazz Machine. Loose and responsive, his sturdy strokes vary from whisper soft caresses to bruising thwacks. Schuller’s eccentric tendency to hum and vocalize in tandem with his bass complements rather than compromises the deep elastic snap he coaxes from his strings. Well over half a century emoting on the licorice stick and Robinson’s command of his reed remains undiminished whether the moment calls for heated improvisation or mellow ensemble accent. Minor miscues and collisions are present in the risk-taking the three regularly engage in, but that’s part and parcel with the CIMP program and, when it boils down to it, what creative improvised music is truly all about.
Posted by derek at 7:36 PM