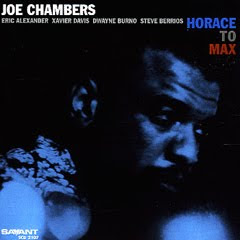 The arc of drummer Joe Chambers’ recording career hasn’t matched the magnitude of his merit until relatively recently. Blue Note used him in a sideman capacity on a number of its seminal Sixties sessions, but never tapped him for the leader’s chair until decades later and then summarily dropped him after just a single album. A checkered stint for Muse in the Seventies suffered alternately from over-ambitiousness and date-stamping catering to commercial concerns. Enter Savant in 2006 and the release of The Outlaw and a new lease on recorded expression. The critically-lauded album highlighted his creative concept on mallet instruments as well as conventional cans. Four years later, this follow-up builds on that foundation in fine fashion.

The disc’s title gives away the ghost(s) with Chambers nodding to past masters (and colleagues) Horace Silver and Max Roach. He also pulls in tunes from the songbooks of other colleagues starting with swinging version of Kenny Dorham’s “Asiatic Raes”, a staple of the classic Jazz Messengers repertoire under Silver’s joint leadership and the pianist’s own contemporaneous “Ecaroh”. Seven of the nine pieces feature Chambers vibes and marimba. The leader’s canny approach shares welcome common ground with his old Blue Note confrere Bobby Hutcherson through melodic pattern drawing and close attention paid to his instruments’ chromatic properties. Pianist Helen Sung and bassist Richie Goode pinch hit for regulars Xavier Davis and Dwayne Burno on Roach’s “Lonesome Lover.” Steve Berrios alternates kit duties on a few of the cuts where Chambers fields mallets, otherwise sticking to percussion.

Chambers’ compositional and arranging talents remain on par with his instrumental skills. His renderings of Roach’s “Man from South Africa” and Wayne Shorter’s “Water Babies”, in particular, are ripe with harmonic contours and fertile solo space. Tenorist Eric Alexander takes to these open-ended modal surroundings especially well. His agile, emotive lines immediately erase any conjectures as to cookie-cutter playing. Guest vocalist Nicole Guiland lends her expressive pipes to Roach’s “Mendacity” and “Lover” and works particularly well in concert with the leader’s tumbling mallet play. Abbey Lincoln comparisons are ascribable in the regal mien she adopts for the pair of pieces with a velvety cerulean articulation and strategic wordless ornamentations enlivening the lyrics. Canonical Monk and a like-minded Chambers original sans piano and kit cap the set off in short order and take the session tally to a definitive win.
Posted by derek at 4:32 AM